With summer moving past its midpoint, we should continue to a see a strong Charlotte real estate market through July. The indicators show as much, but with another drop in inventory for homes, the home buying competition is still high. Charlotte continues to be a seller’s market.

Here is an overview of the Charlotte real estate trends in July 2017:

Total Listings Down, Along With Sales Price

As we near the close of summer, we’re beginning to see the first signs of expected cyclical market depression. Total listings are down 4.4 percent from June, continuing a general downward trend that began in March when new listings peaked at 6,050. In July, new listings were at their lowest point since then, at 5,427.

Closed sales are actually down 18.8% from the previous month, which may simply reflect the beginning of the end of the market boom for the year, as it stays basically in line with the year-over-year increases that we’ve observed from 2016 to 2017. Total sales are still marking a 12-month increase of 3.1% so there’s likely no reason to read too far into this historically volatile metric.

Days on the Market Decrease Once Again 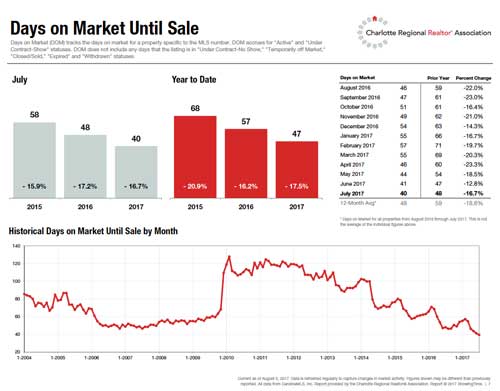 The downward trend of the average number of days a home remains on the market continued in July, hitting 40 days, down 4 percent from the previous month. This is the largest indicator that the real estate market in Charlotte is becoming more and more friendly to sellers, as not only has there been a downward trend in both days on the market until the final sale, but also the total time from listing to close since February. What’s more, both of these indicators have shown steady decreases from the same times in 2016, meaning people that list their homes are selling them much faster than they used to.

Some of this can be attributed to another decrease in inventory for homes, which raises housing demand in the market and causes more offers to be made on a given property. One metric that supports this claim of high competition in the market is the percentage of the list price received on a sale, which remains higher than normal at 97.3 percent.

Charlotte real estate trends for July 2017 showed another decrease in housing inventory, which continues to be a concerning point for the market. With another drop of 4.9 from June, inventory is now at 10,174, the lowest point since February and down nearly 20 percent from this same point 12 months ago.

With Charlotte’s low interest rates staying stable, currently hovering around 4% percent for a 30-year fixed interest loan, those interested in becoming new home buyers are having to continue to pass on the option as they are discouraged by inflation in demand for local homes.

It’s not all bad for buyers, however. According to the Housing Affordability Index, homes were more affordable in July than they were in June, giving prospective home buyers reason to stay optimistic.

Those who opt to rent can still get an average rental price that has continued to decrease, both from last month and year-over-year.

All in all, Charlotte real estate trends in July show that the market is still going strong, especially for sellers. As it remains an outperformer of national averages in many metrics, including interest rate, there is reason for consumer optimism in the market for Charlotte.